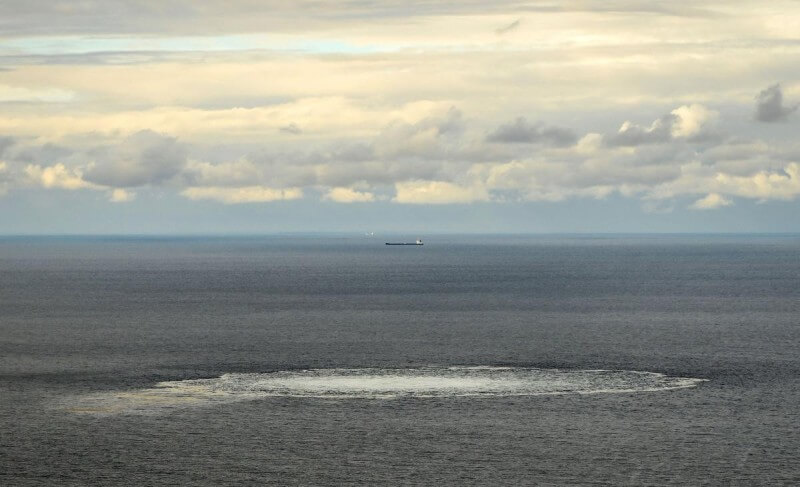 With the pipeline sabotage, the military war has expanded beyond Ukraine.

When unexpected events occur in foreign affairs, like a sudden ousting of a government or an explosion of pipelines, an important question is: cui bono, who benefits?

On September 26, the company operating Nord Stream reported a sudden loss of pressure in its undersea pipelines from Russia to Germany. Simultaneously, Danish and Swedish authorities detected a series of undersea explosions offshore the Danish island of Bornholm in the Baltic Sea. Investigation revealed the explosions had damaged the pipelines. The release of gas into the atmosphere caused an environmental catastrophe. The operating company declined to estimate when the pipeline system might be operational again.

European Commission President Ursula von der Leyen called it an act of sabotage and warned of the strongest possible response. She failed to speculate on the culprit. Other Western leaders have been equally circumspect. US Secretary of State Antony Blinken blandly said that, if sabotage is confirmed, “that’s clearly in no one’s interest.” He added later, “It’s a tremendous opportunity to once and for all remove the dependence on Russian energy.”

Western media too downplayed the incident, though some columnists hinted the perpetrator might be Russia. Taking a contrary view, right-wing commentator Tucker Carlson on Fox News blamed the Biden administration, calling the sabotage a war crime against humanity, with methane leaks to the atmosphere on an unprecedented scale.

Russian President Vladimir Putin bluntly accused the West of causing the explosions, saying “It is clear to everyone who stands to gain.” At an emergency meeting of the UN Security Council on September 30, Russia called for a comprehensive objective investigation with Russian and German participation, not just Danish and Swedish. The US ‘categorically’ denied involvement in the incident.

Cui bono? While an independent investigation has yet to take place and indeed may never occur, there are straws in the wind—circumstantial evidence—pointing to who could have been the perpetrator. Only a very few countries have the technological resources and access to the Baltic Sea to carry out such attacks. That rules out Ukraine despite its animosity to Nord Stream. France may have the technology but has no reason to antagonize its ally Germany. Britain acts in lockstep with the United States and is unlikely to act independently. That leaves Russia, Poland and the United States. Like an Agatha Christie mystery, the culprit is likely to be one or more of them.

The sabotage cannot benefit Russia. It owns the pipelines in full or part and can turn them on or off without wrecking them. The Russians told the Security Council there was no point for them to undermine the project which cost “huge investment” and would bring them “considerable economic returns.” Despite the war in Ukraine, Russia continued supplying gas to Europe. It was European countries (Poland, Ukraine, Germany) that blocked overland and undersea pipelines bringing gas to Europe.

Poland itself is a transit route for Russian gas. For more than 20 years, the Yamal pipeline brought Russian gas via Poland to Germany. In 2020, Poland ended its long-term deal with Russia, preferring short-term ‘spot’ deals instead, and earlier this year little gas flowed through the pipeline. In May, Russia stopped deliveries altogether after Poland refused to pay in rubles. Instead, Poland has started to receive Norwegian gas via a brand-new undersea pipeline from Denmark named Baltic Pipe. It was inaugurated on September 27, the same day the Nord Stream pipelines were damaged. The explosions also coincided with results of the referenda in the Donbas, Kherson and Zaporozhye regions of Ukraine. Russia has now accepted these regions as parts of its territory.

What about the United States? On January 27, US Under Secretary of State Victoria Nuland declared, “If Russia invades Ukraine, one way or another, Nord Stream 2 will not move forward.” Confirming on February 7, President Joe Biden stated that, if Moscow invaded Ukraine, “there will no longer be a Nord Stream 2. We will bring an end to it… I promise you, we’ll be able to do it.”

In June and July, NATO practiced mine-hunting operations off the coast of Denmark with unmanned underwater vehicles. One US vessel, the amphibious assault ship USS Kearsarge, remained in the Baltic Sea until September 22, having conducted more exercises near Bornholm. Interestingly, on September 2 one of its MH-60S helicopters was logged patrolling along the Nord Stream 2 pipeline route. According to the investigative journalist Moon of Alabama, the MH-60S carries electromagnetic sensors which can detect submarines, mines and sub-sea pipelines.

The circumstantial evidence and the process of elimination point to action by the United States. If so, would Denmark and Sweden be unaware of what was happening under their noses in such highly monitored waters?

In contrast, Russia has no reason to destroy its own source of revenues. As the world’s single largest exporter of natural gas, and the second largest oil exporter, pipelines and sea routes to market are vital to Russia’s economy. Russia has been selling oil and gas to Europe for over 50 years. Washington has never liked the idea of Russia integrated into Europe. It sees Russia-Europe ties as a threat to US leadership and opposes Russian gas to Europe, citing energy security.

After 2014, with the violent overthrow of its democratically-elected government, Ukraine became pro-West and anti-Russian. That same year, with fracking, the United States became the world’s largest producer of oil and gas, and began exporting liquefied natural gas. Europe is the world’s second largest market for gas. The US wanted to muscle in, displacing Russian gas. Indeed, destroying the pipelines will result in increased US gas exports to Europe. But US gas sells at high spot prices, currently five times higher than Russian long-term prices. Obviously, Europe preferred the much cheaper Russian gas.

Europe had been diversifying its sources of energy. It began importing Russian gas in the 1960s. The binding of east and west by pipeline helped build trust and openness. Until recently, the EU was importing 40 percent of its gas from Russia. In the Soviet era, Russian gas pipelines to Europe passed mostly through Ukraine. Since 1991, Ukraine’s payment problems, corruption, and hostility threatened Russia’s gas exports. Russia and European companies invested in new joint pipelines to bypass Ukraine.

Nord Stream 1 began operations in 2011. Nord Stream 2 was completed in 2021. Germany was becoming Europe’s main entry point for Russian gas. But Nord Stream 2 is in limbo. Germany’s energy regulator needed to certify it before start-up. On February 22, one day after Russia recognized Donetsk and Luhansk as sovereign states, Germany suspended the certification process.

Nord Stream 2 made commercial sense. The route to market is much shorter and cheaper than via Ukraine. But the project was highly controversial. Germany and central Europe wanted it, while Ukraine and Poland opposed it tooth-and-nail. The US went all out to kill it. The project met one roadblock after another (you can read further details in my earlier articles on this subject). Blocking Russian gas to Europe could weaken Russia politically and economically. Commercially, the US has become a major exporter of LNG.

Nord Stream 1, inaugurated eleven years ago, operated without a hitch until this summer. At 1,200 kilometres, it is the world’s longest sub-sea pipeline. It needs monster compressor turbines to push gas down the line. The compressor station is in Russia, where the line begins. Gazprom ships the turbines periodically to Montréal for maintenance. One was there in May, when Canada imposed sanctions on Russia’s oil and gas sector. Canada subsequently stopped its return to Russia.

Gazprom abruptly halted sending another for maintenance and cut delivery to 20 percent of capacity. Germany begged Canada to return the first turbine, which Canada did—to Germany. And there it rotted. Gazprom claimed it lacked the right paperwork to receive the turbine. In September, it halted the final working turbine for maintenance and shut the pipeline indefinitely. Each nation blamed the other.

Russian gas continues to transit Ukraine. In May, however, Ukraine shut down one of its two gas pipelines from Russia. It claimed it had lost control of a compressor station in Russian-occupied territory. That’s as may be. With less gas reaching Europe through Ukraine and the Nord Stream system shut down, gas prices rose through the roof.

Day-to-day spot prices are now more than 15 times what they were two years ago. Europe faces economic disaster. Not Russia—it has gas in abundance and several new buyers in Asia. Europe’s gas market is primarily day-to-day trading, though long-term contracts exist. During the pandemic, spot prices were lower than long-term. They are now much higher.

The only route now delivering Russian gas unimpeded to Europe is TurkStream. Opened in 2020, it crosses under the Black Sea to Turkey, bypassing Ukraine. TurkStream supplies the Turkish market. It also connects to Bulgaria, thence Serbia and Hungary.

Why were the Nord Stream pipelines sabotaged? Who benefits? A credible rationale is the fear of some Western countries—notably the US and Britain—that the war might not last long enough to weaken Russia. Western sanctions have backfired badly on Europe. Europe has shot itself in the foot or, as Hungarian Prime Minister Viktor Orbán put it, “in the lungs!” With trade dislocated around the world, prices of Russia’s major exports have soared, increasing Russian revenues. Europe faces an energy crisis and economic devastation. Major German industries are reportedly relocating plants to the United States.

Popular unrest was pressuring European governments to stop the war, lift the sanctions, and rescue their economies by accepting Nord Stream gas. According to journalist Pepe Escobar, diplomatic sources confirmed that Berlin and Moscow were involved in a secret negotiation to solve both Nord Stream 1 and 2. The sabotage precludes Germany from reopening the Nord Stream pipelines and locks Europe into high-cost US gas. Washington can continue its plans to weaken Russia and bring about regime change. Some commentators posit Washington also seeks to increase its geopolitical and economic advantage by weakening Germany and Europe.

The war in Ukraine is really three wars in one: military, informational, and economic. With the pipeline sabotage, the military war has expanded beyond Ukraine. The information war is fought in media, where Western control of the story has been highly emotional, omitting the reality of an eight-year civil war, Russian concerns, and other relevant history. The economic war reverberates around the world. Oil and gas are an integral part of the conflict. The pipeline sabotage has taken the war to a new level. It has opened a Pandora’s box of troubles and has endangered pipelines worldwide. It is clear who benefits. Yet with Western control of the narrative, the real culprit may never be identified.

John Foster is the author of Oil and World Politics: The real story of today’s conflict zones (Lorimer Books, 2018). He held positions with the World Bank, Inter-American Development Bank, BP and Petro-Canada. His blog is johnfosterwrites.com.