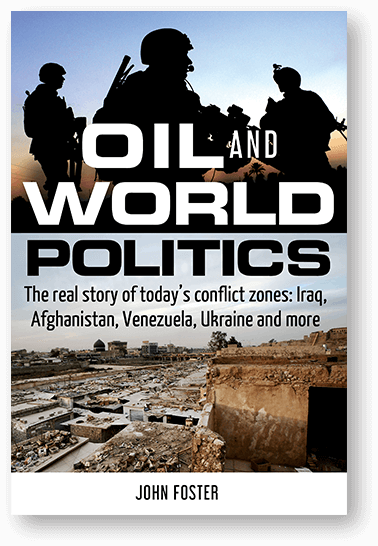 The Book: Oil and World Politics

GET YOUR COPY TODAY

Petroleum is the most valuable commodity in the world and an enormous source of wealth for those who sell it, transport it and transform it for its many uses. As the engine of modern economies and industries, governments everywhere want to assure steady supplies. Without it, their economies would grind to a standstill.

Since petroleum is not evenly distributed around the world, powerful countries want to be sure they have access to supplies and markets, whatever the cost to the environment or human life. Coveting the petroleum of another country is against the rules of international law — yet if accomplished surreptitiously, under the cover of some laudable action, it’s a bonanza. This is the basis of “the petroleum game,” where countries jockey for control of the world’s oil and natural gas. It’s an ongoing game of rivalry among global and regional countries, each pursuing its own interests and using whatever tools, allies organizations offer advantage.

The book identifies the hidden issues behind many of the conflicts in the world today: military interventions (Afghanistan, Iraq, Libya, Syria), tensions around international waterways (Persian Gulf, South China Sea), the use of sanctions or political interference related to petroleum trade (Iran, Russia, Venezuela). It illuminates the petroleum-related reasons for government actions usually camouflaged and rarely discussed publicly by Western politicians or media.

Petroleum geopolitics are complex. When clashes and conflicts occur, they are multi-dimensional. The book ferrets out pieces of the multi-faceted puzzle in the dark world of petroleum and fits them together.

John Foster is an international oil economist, and author, with more than 40 years of experience. His articles have appeared in numerous newspapers, periodicals and websites. His book, Oil and World Politics – the Real Story of Today’s Conflict Zones, was published in 2018. Born in London England, he graduated from Cambridge University. He has held positions with the World Bank, Inter American Development Bank, Petro Canada and British Petroleum.
Buy The Book
Recent Talks